Do poppies bloom in Flanders fields in November? 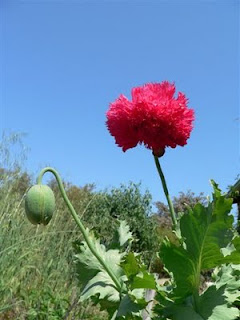 As a girl growing up in England I remember Armistice Day being called Poppy Day.

In Australia we call it Remembrance Day but the poppy is still the iconic symbol of remembrance.

Last night I spoke to my 99 year old Mum on the phone and she told me that her brother had died in the trenches on Armistice Day - I believe he was 18 years old and had just gone to war.
My mother's memory of the time is that her mother's hair turned white virtually overnight when she received the news of her son's death.

When I was driving south last week I took a picture of some poppies growing wild in a field (in November) - but I now live in Tasmania in the southern hemisphere.

Surely there are no poppies in the fields of Flanders in Europe in November?
Pic: A poppy in my garden in Western Australia (2006) 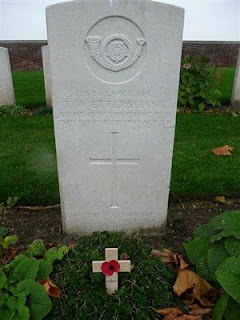 Since writing this post, I discovered that my mother's memories were not quite correct but that her brother was 21 when he was killed in action and the date of his death was 19th November, 1915. Sadly, my mother passed away a few months ago so this year Remembrance Day will be all the more poignant.

Pic: Grave of my Uncle, T. W. Ettershank, who died in the Great War.
My sincere thanks to my friend from Belgium who visited the New Irish Farm War Cemetery and placed the poppy memorial (6 Nov 2010).
Posted by M. C. Muir at 2:24 pm

Anonymous said...
This comment has been removed by a blog administrator.
8:37 am

I am sorry if this article offended - it was not meant to.
The question I raised at the end is that to my knowledge poppies do not flower in November but are a spring flowering plant.
This comment should not detract from the sentiment and respect I have expressed in the first part of the article.
MM

Considering one of the fallen was her own family, I would say she has a regard form them. Perhaps you should take your own advice and allow someone to have their own ruminations on their own blog. I have a visit to Flanders Field on my bucket list, but I really would rather do it while it's in bloom. I came to this blog hoping for an answer. The answer I got was: don't plan a November trip. I also did a quick bit of research and can find no logical connection for having Veterans Day (US) --- i.e. Armistice Day (UK) --- in November.

Thank you for your comment, Michelle. Because the Flanders Fields today are cultivated fields, even when the wheat is high, I wonder if the farmers tolerate poppies growing in them in the season. Of course by November the crops would have been cut and the paddocks bare.
I found a very nice article at this website about the corn poppy: http://botanical.com/site/column_rita/flanders.html

Maury said...
This comment has been removed by the author.
11:22 am

This use of poppies actually may have began in Canada. "Poppies traditionally are worn on Remembrance Day in Canada, inspired by the World War I poem 'In Flanders Fields,' in which the author, John McCrae, writes of the poppies in the field where soldiers died. The idea for the poppies as a symbol of remembrance was conceived by American professor Moina Michael". (https://www.bostonglobe.com/sports/bruins/2019/11/11/don-cherry-fired-sportsnet-following-xenophobic-comments/jFWAQ8FBNTvmu4jrKFGciI/story.html?event=event25) In the USA, poppies are used to commemorate "Disabled American Veterans".
Of course, poppies don't generally bloom in Europe in November, but WW1 soldiers lost their lives and were buried while the poppies were in bloom.