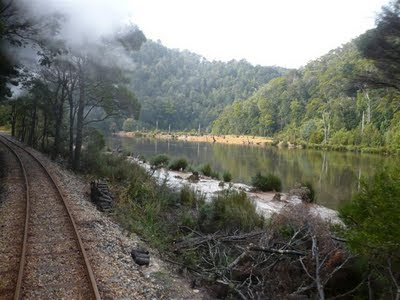 The King and Queen Rivers of Tasmania's west coast wilderness, though appearing normal, are both biologically dead and it could be 1000 years before they will carry enough oxygen to support any form of fish or plant life.
The absence of oxygen is a direct result of pollution through deposits of heavy minerals from mine tailing being purposely washed into their waters. Over 100 millions of tons of tailings were washed into the rivers preventing anything from growing in them and creating banks of toxic silt meters deep.
The death of these once beautiful waterways is due to the greed of the miners extracting ores from the Mt Lyell area and historic practices which ignored environmental damage. 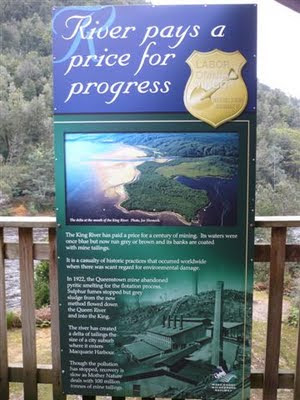 "The King River has paid a price for century of mining.
In 1922 the Queenstown mine abandoned pyritic smelting in favour of the floatation process and as a result the clouds of sulphur fumes stopped but grey sludge generated by the new production method flowed down the Queen River and into the King.
Gradually the river created a huge delta in Macquarie Harbour made up of tailings the size of a city suburb."
Pollution has now stopped but recovery is painfully slow as Mother Nature deals with 100 million tonnes of toxic mine tailings. 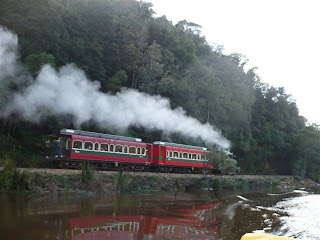 Pic: West Coast Tourist Railway touches the King River giving passengers a chance to see a little of the dead river banks
Posted by M. C. Muir at 9:08 am