Monument to THE CHILD WHO WAS NEVER BORN The anguish of Abortion. The time of Forgiveness.


Undoubtedly, this is the most poignant memorial I have ever seen. 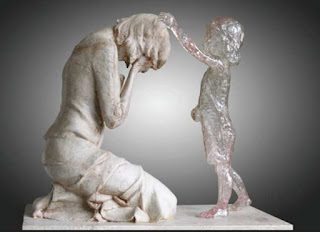 It was commissioned by a group of young mothers who had lost babies through abortion and was created by art student, Martin Hudáček of Slovakia.

“The sculpture shows a woman in great sorrow grieving her abortion. The second figure is the aborted infant, presented as a young child, who, in a very touching, healing way, comes to the mother, to offer forgiveness.”*
In the sculpture, the child is  transparent - a figment of the mother's imagination - a fleeting apparition - an angel.
I believe the statue speaks equally to women who have lost a child through miscarriage.

Surprisingly, in a novel I wrote several years ago, before seeing this picture, I featured an elderly gentleman whose past held a dark secret. In his effort to unravel the mystery, he made a practice of wandering through graveyards looking for an inscription on a grave to A CHILD WHO WAS NEVER BORN.
The reason he searched was because his young wife had died when she was carrying their child and when she was buried the child was buried within her.
Because the infant was never born into the world, it was never given a name. It also never had a date of birth or death, and it never had an inscription on a gravestone, not even on its mother's.

When I saw this memorial dedicated by a group of women to the unborn child, I was touched. I too have lost a child, but not an infant.
In this memorial, the artist has captured two remarkable images - the heart-rending anguish of abortion and the loss of a child whose image can only be conceived by the mother.
Beautiful.

* April 2, 2012 (https://www.lifesitenews.com/news/heart-rending-young-slovakian-sculptor-captures-post-abortion-pain-mercy-an).
THE BLACK THREAD by Margaret Muir is available on Amazon.
Posted by M. C. Muir at 3:24 pm

Amazing story, Margaret - although of course very sad. Couldn't help but wonder if somewhere, somehow, your book was read by someone, somewhere and became the trigger for this.

Where did you first see it and is this the original, or has it become an item now for folk to be able to purchase copies of?

Amazing story, Margaret - although of course very sad. Couldn't help but wonder if somewhere, somehow, your book was read by something and became the trigger for this.

I first saw in on Facebook several years ago. The link (below) says more than I have said and gives a link to where you can download a picture.
https://www.lifesitenews.com/news/heart-rending-young-slovakian-sculptor-captures-post-abortion-pain-mercy-an
I hope that helps.