TWO'S A CREW - a circumnavigation of Australia 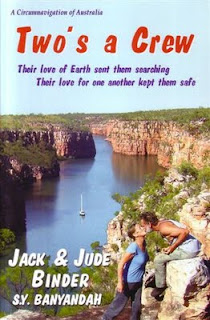 When Jack and Jude Binder sailed around Australia in Banyandah, their home-made 12m yacht, they took time out along the way to smell the roses. The 9000 nautical mile voyage took them to crocodile infested waters, coral atolls, ancient aboriginal sites and through Hell’s Gates itself.
Together they fished, photographed, and above all recorded the bounties of nature along the way.

Jack, (the lad from LA who now calls the sea and Australia home), wrote most of the book and apart from occasional lapses into personal diary style, his elegant descriptive passages are proof of his close bond with the Earth. Judith’s presence is felt throughout the book, sharing the same strength, courage and love of the wild as her man. 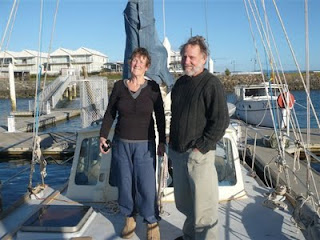 In Banyandah, they experienced the full force of wind, waves and currents in a voyage of adventure and exploration which was only made possible by their commitment to sailing and to each other.
For the cruising yachtsman or armchair traveller, TWO’S A CREW is a recommended read.
The read more about the book go to:Two's a Crew - A circumnavigation of Australia

Email ThisBlogThis!Share to TwitterShare to FacebookShare to Pinterest
Labels: Tasmania, Two's a Crew

How grand, glad you thoroughly enjoyed our book and loved the bits around the west coast of Tasmania. We agree, so filled with history and raw nature. See you again in Spring.