THE SPOT UPON THE SEA - by Margaret Muir

Beware of Novice Navigators
A nonsense poem written on a tall ship in the Indian Ocean when the trainee crew was challenged to navigate the ship to a location designated by the Captain. 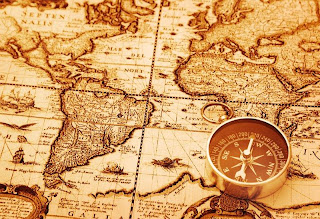 There was panic on the poop deck when the word was passed around
that the motley crew was taking on the ship.
The Captain gave a shudder, there was little he could do.
His only goal was to survive the trip.

But the Junior Officers – the leaders of the Watch
didn’t wait for the disaster to unfold,
They jumped into the fizz boat that was lowered to the sea
and sped off in the darkness, it is told.

The bold Captain, in his wisdom said, “You can take this barquentine,
if you prove that you can sail her true and square.”
So he handed them a challenge to navigate the ship
to a Spot upon the ocean, was his dare.

Three novice navigators to the charthouse they did go.
Their aim to meet the challenge, ‘twas their choice.
They would chart a course for sailing to this Spot upon the sea.
“We will get you there,” they bellowed in one voice.

And the goal the Captain set them was 32 degrees of south
and a longitude – one-hundred-fourteen east.
If they followed that chart reference to the Spot upon the sea,
they would prove themselves true sailors, at the least.

“We will do it,” said the boldest. “I will guarantee you that
we will take you to this Spot upon the sea.
Thirty-two degrees south latitude is easy,” they agreed.
With one-one-four we’ll have you there for tea.”

And no sooner had he spoken, than he wrote it in the log
- one-hundred-fourteen latitude of west
And with compass and a ruler started drawing on the chart.
He really felt he had to do his best.

‘Twas a tiny little error led the barquentine off course.
To the west of the meridian they were bound
and with sixteen sails a-flying, they would seek that special Spot,
yet they didn’t know it wasn’t to be found.

The days were long and balmy and the winds were fresh and warm
and time slipped by and no one seemed to care,
The crew was quite contented playing deck games in the sun
or to lend a hand when it was time to wear.

With the tall ship’s course still charted to one-hundred-fourteen west,
they passed Good Hope and headed for Cape Horn.
And the crew, they were oblivious to what was going on
just completed cleaning stations every morn. 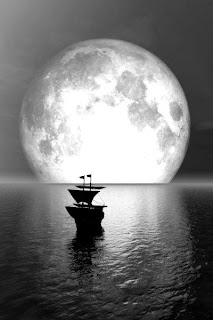 North west in the Pacific, was the course they had to take
to that thirty-two by one-one-four degrees,
And the navigators gleeful, started looking for that Spot,
their binoculars focused on the seas.

And the legend of this barquentine is many times retold
how the ghostly ship still sails upon the sea
with her crew forever looking for that damned elusive Spot
and it’s told they’ll look for all Eternity.

THE SPOT UPON THE SEA is included in a short book of verse entitled: 'Words on a Crumpled Page' by Margaret Muir and available from www.LULU.com

Email ThisBlogThis!Share to TwitterShare to FacebookShare to Pinterest
Labels: Margaret Muir, navigation, sea, Tall ships, the spot upon the sea, Words on a Crumpled Page

Great vacation might be your dream. Travel to Bali is not always expensive as there are many international flights providing special rates for early bird booking. There are also many selection of Bali hotels offering special discount rates including Bali villas and budget Bali accommodation